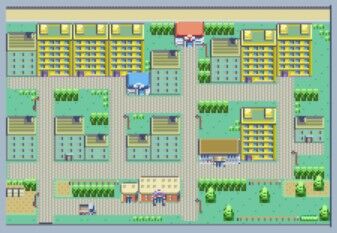 Shadowfell is an infamous city in the center of West Godra. When you want to go in here, you will be handed a Green Card, that is used to regulate passage in and out of the city.

At Night you will notice that most citizens left the street and polizemen are all over the city.

When you leave after beating the gym and are not associated with the War Party, your Rival will wait for you to give you TM 94 Rock Smash (not without a battle of course).

Shadowfell lies at the northwestern end of Route 5. Route 6 extends from the city entrance westwards, but at first this is blocked by smashable boulders.

Type - Most Pokémon are Dark type with pure Dark, Dark/Poison, Ground/Dark and Dark/Ghosts Dual types, as well as a pure Ghost type and an optional Grass/Poison Pokémon.

Strategy - To get to Gymleader Rachael you need to beat Gambler Lester, turn both switches on, beat Hiker Derick, then turn the left switch off again.

Fighting, Bug or Fairy type attacks will come in handy for beating the Dark Pokémon. Keep in mind the fighting attacks don't work for the ghost Pokémon Duskull and Sableye, so have something else ready or use Foresight.

Reward - Shade badge which enables you to use Rock Smash outside battle, TM 66 Payback

Community content is available under CC-BY-SA unless otherwise noted.
Advertisement